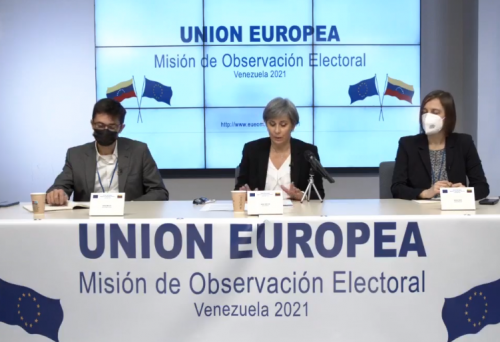 The European Union’s Electoral Observation Mission details electoral reforms which are critical to providing a peaceful, democratic, and institutional path to solving the Venezuelan crises after observing the November 2021 regional elections in the country

For Venezuelans seeking a peaceful and democratic resolution to the country’s multiple crises, the recovery of a free and fair electoral path is critical. The government’s dismantling of the State’s democratic institutions has systematically obstructed Venezuelan society’s ability to solve its problems. In 2021, after intensive demands for social dialogue among all actors by civil society organizations, a new and more balanced National Electoral Council (CNE) board was elected, a necessary first step in the State’s re-institutionalization.

Subsequently, as a result of political dialogues, the European Union came to an agreement with Venezuela’s new electoral authorities to establish an Electoral Observation Mission (EOM) for Venezuela’s November 2021 municipal and regional elections – the last EU-EOM  in Venezuela took place 15 years ago. The EOM published its final report on the election on February 22, 2022, assessing its shortcomings and providing recommendations for future electoral processes. According to the report, the municipal and regional elections “were widely seen as a possible first step towards a broad political agreement on the necessary conditions to conduct democratic elections accepted by all parties and to advance the country’s re-institutionalisation.”

Venezuelan civil society organization are insisting that the European Union should seek to establish an Electoral Follow-up Mission, by mid or late 2023, to assess the implementation of these recommendations and discuss further reforms. Here we share the main findings and what they mean for peacebuilding efforts in the country.

The EOM found structural shortcomings in the November 2021 municipal and regional elections, including a “lack of legal certainty, which caused the arbitrary disqualification of candidates and the rerun elections in the State of Barinas; the handing over of party symbols and electoral ticket to internal minority party factions; the extensive use of state resources in the campaign; and the unequal access to the mass media by candidates.”

The report highlights that respect for the rule of law is a major obstacle to free and fair elections. The Venezuelan Supreme Court of Justice (TSJ) has taken a direct role in limiting opposition political party’s political rights, the Comptroller General has rejected opposition candidacies through administrative processes without notification or explicit reasoning, and the state media regulatory agency (CONTAEL) takes no measures to sanction state media bias for the ruling United Socialist Party of Venezuela (PSUV).

The EOM has also emphasized that the new CNE board is the most balanced in the past 20 years, with three councillors close to the government and two linked to the opposition and civil society. While the CNE board achieved internal dialogue to improve certain conditions, and the councillors linked to the opposition and civil society did not hide dissenting views, the EOM reiterates that the electoral body remains without the power to effectively sanction State actors who violate electoral law.

The EOM’s final report offers 23 recommendations to improve future electoral processes. For those interested in learning the details of each proposal, we suggest reading Annex I: Matrix of Recommendations, where the EOM describes the context for each recommendation, the proposed changes in the legal framework for its implementation, the institutions responsible for the policy, and the corresponding international best practices and norms.

However, the Mission also established seven priority recommendations which seek to address the “main structural deficiencies” described in the report:

The EOM’s recommendations stress the importance of rebuilding the Venezuelan State’s commitment to the rule of law as a necessary condition to guarantee free and fair electoral processes. In doing so, the Mission reiterates the conclusions of multiple international protection mechanisms which have insisted upon judicial reform to guarantee basic human rights.

According to the UN Independent International Fact-Finding Mission stated: “The centrality of the justice system to the Venezuelan human rights crisis cannot be overstated. Had prosecutorial and judicial actors performed their constitutional role appropriately, they could have either prevented the crimes and violations from being committed, or placed rigorous impediments upon public security and intelligence services’ ability to commit them.”

Likewise, in the Memorandum of Understanding signed by the International Criminal Court’s (ICC) Prosecutor’s Office and the Venezuelan State on November 3, 2021, President Nicolás Maduro agrees to adopt all necessary measures to guarantee the effective administration of justice. On March 31, Prosecutor Karim Khan announced the opening of an ICC office in Caracas with the objective of proactively following up with the commitments of the Memorandum.

A diversity of Venezuelan civil society organizations dedicated to re-democratization efforts strongly support a European Union Electoral Follow-up Mission (EFM) by mid or late 2023 to assess the implementation of these recommendations and suggest further reforms. An agreement to establish a new mission in cooperation with the Venezuelan State could be facilitated by the United Nations General Secretariat.

Furthermore, Venezuelans’ ability to solve their issues peacefully and democratically require the Venezuelan State to guarantee free and fair elections under the rule of law. Additionally, considering that the negotiated selection of the new CNE board achieved initial progress in re-institutionalizing the electoral authority, the international community should support further negotiations amongst political actors that seek to re-institutionalize other State bodies. The international community should be particularly attentive to the effectiveness of reforms in the judiciary power, considering the centrality of rule of law guarantees for a robust electoral path. Renewed negotiations in Mexico should address re-institutionalization efforts with robust commitments by the parties involved.

On April 6th, the Citizen Electoral Network and Foro Cívico published an in-depth report providing a balance of the November 2021 municipal and regional elections, detailing its potential as a first step towards electoral re-institutionalization. Click here to read the report (in Spanish).