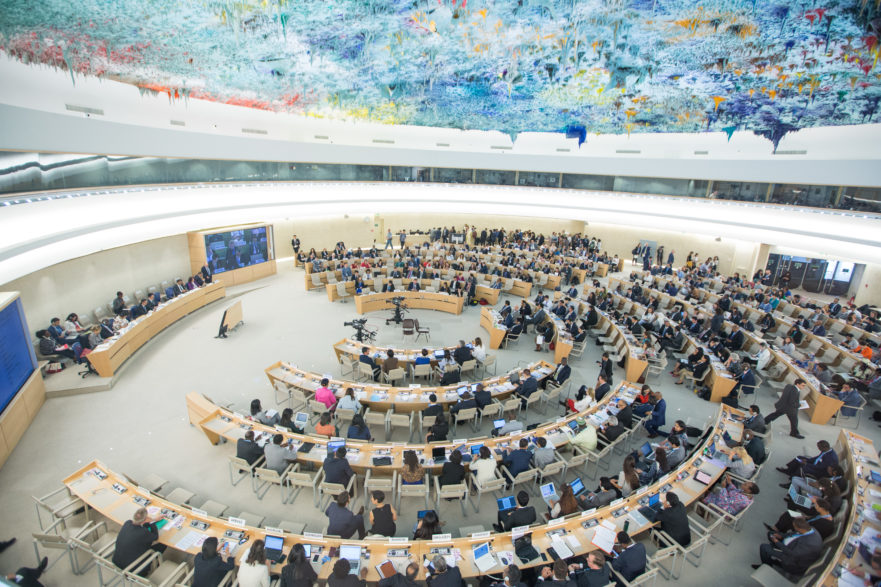 UN Member-States examined Venezuela’s human rights situation during the 3rd Cycle of the Universal Periodic Review (UPR) on January 25th, 2022. The UPR is a State-driven process that involves a review of the human rights records of all UN Member-States under the auspices of the Human Rights Council. As part of this process, civil society organizations had sent 173 reports to the UPR Secretariat offering in-depth information on the human rights situation in the country.

States made 328 recommendations regarding the most pressing issues in the political, humanitarian, and human rights crisis that Venezuela has experienced during the last years, including elections, political negotiations, cooperation with the Fact-Finding Mission, and independence of the Judiciary. The speeches of most examining States showed a complex and profound understanding of the most significant challenges experienced by the Venezuelan population and their role in finding a solution to the crisis.

Although there have been several attempts to negotiate a peaceful solution to Venezuela’s political and human rights crisis, these efforts had previously failed because of different underlying problems. In 2020, the Venezuelan government and an opposition platform initiated a new negotiation process facilitated by the Norway government.

Norway had been present during past negotiation efforts in 2018 and facilitated the talks between the delegations of Nicolás Maduro and Juan Guaidó in Oslo and Barbados from May to August 2019.

The new negotiation process began on August 13th, 2021, in Mexico City, where the parties signed a Memorandum of Understanding. Norway continues to be a facilitator of this new process, where the parties also designated the Netherlands and Russia as accompanying countries.

According to the Memorandum of Understanding, the parties in the negotiation will discuss different issues such as restoring democratic institutions, reparations for victims, elections, and sanctions. Representatives of civil society have also organized themselves to monitor the negotiation process.

Last October, there was a setback during the negotiations. The head of the delegation representing the Venezuelan government announced that they wouldn’t be attending the next round of the talks due to the extradition of their close ally, Colombian citizen Alex Saab, to the United States.

The international community seems to have a united approach regarding two factors: 1) Venezuela is currently experiencing a crisis, and 2) negotiations are essential for finding solutions. During the UPR session, several States referred to the need to resume the negotiation efforts and work for peaceful and negotiated solutions to the crisis.

For instance, France recommended resuming inter-Venezuelan political negotiations in Mexico to allow a negotiated exit to the crisis, including the organization of free and democratic presidential and legislative elections. Georgia recommended that the State ensure a peaceful solution to the current crisis, leading to free and fair elections. New Zealand specifically mentioned that the State should return to the negotiating table to continue discussions towards a peaceful, democratic, and negotiated solution to the current crisis. Poland recommended re-engaging in a meaningful dialogue with all Venezuelan stakeholders to resolve the present crisis peacefully. Other States, namely Spain, the Holy See, Norway, Turkey, and Yemen, made similar recommendations.

Ensuring the conditions for free and fair elections

An important dimension for the solution of the crisis is naturally the holding of free, independent, and fair elections, which a group of States also mentioned during the UPR session.

Civil society organizations have constantly denounced the lack of electoral guarantees needed to have fair elections in the country and sustained that a peaceful solution to the Venezuelan crisis inevitably requires the holding of free, fair, and democratic elections, and for that to be possible, there should be a political will for change and acceptance among the different political actors.

Last November 2021, the government called for regional elections, which did not have sufficient guarantees to be categorized as free and fair. On the contrary, the ruling party dominated these elections, with only 4 of the 23 governor’s positions won by the opposition. Of particular concern was the contest in the state of Barinas, which has been a symbolic territory for the pro-government party. After losing the position for governor in Barinas, the government nullified the vote and called for a new election on January 9th. After major campaigning efforts, the government lost a second time showing the lack of support for their party and the chance for there to be small conquests in the electoral field.

During the UPR session, the States expressed concern over the lack of electoral guarantees and the lack of independence of the institution in charge of conducting elections (National Electoral Council) and urged Venezuela to ensure all conditions for free, fair, peaceful, and independent elections.

As mentioned before, France and Georgia highlighted the importance of the solution to the crisis to include the organization of free and democratic presidential and legislative elections. New Zealand recommended that Venezuela guarantee full participation in electoral processes by all parties, while Brazil asked to ensure all conditions for holding free, fair, peaceful, and independent elections to restore democracy. Similarly, Israel, Ukraine, and Chile made a recommendation to immediately hold free, fair, and credible elections with an independent National Electoral Council, and the United Kingdom recommended the State to respect political parties’ independence, lift arbitrary disqualifications of dissident leaders, and cease to override Venezuelans’ will through court decisions.

The international community can also have a defining role in strengthening the electoral cycles and institutions. Some sectors in the Venezuelan opposition are constantly pondering whether to participate in unfair elections with the fear of legitimizing them or continuing a failed strategy of abandoning electoral spaces. The recommendations of some States come perfectly timed: part of the opposition and civil society has decided to continue participating in the elections called by the government while at the same time denouncing the different irregularities and demanding electoral guarantees.

The Foro Civico, a platform seeking to allow the possibility of a national dialogue that includes all sectors and leads Venezuela to a comprehensive negotiation that ensures democratic stability and future governance, has stated that to hold free and fair elections the Venezuelan authorities need to guarantee certain conditions. Some of these conditions are: to ensure the independence of the Electoral National Council (CNE); the reestablishment of political pluralism, including the release of political prisoners, and to allow opposition political leaders to run for elections; accepting national and international electoral observation; updating and purging of the Electoral Registry, allowing the registration of millions of young people who are not registered, and other millions who are outside the country without proper IDs and without the right to participate in elections. Foro Civico has also highlighted the need to respect the popular vote, which is understood not only as respect for the results on Election Day but also as a guarantee for the effective exercise of political power on the part of the elected authorities once they are sworn in. The international community will have a defining role in the demand for these conditions.

The persecution of human rights defenders and political opponents

One of the most complex elements of the Venezuela crisis is that the quest for the re-institutionalization of the electoral system and the progress in the negotiations efforts is taking place while the persecution against human rights defenders and opponents continues. State authorities use security forces to persecute, threaten, intimidate and imprison anyone perceived as an opponent to the government. This has also included constant persecution against human rights defenders. The case of Javier Tarazona from Fundaredes is well known in this respect.

Cooperation of the State with international mechanism, including the Fact-Finding Mission on Venezuela

States also addressed the lack of compliance and cooperation with international mechanisms, representing one of the most critical challenges. Venezuela has denied access to UN special procedures to its territory and has not cooperated with the Fact-Finding Mission created by the Human Rights Council.

In 2019, the Human Rights Council created the Fact-Finding Mission on Venezuela to assess human rights violations committed since 2014 and renewed its mandate for two more years in 2020. The FFM has become an essential mechanism in the quest for accountability and the search for truth in Venezuela. However, the Mission has been forced to operate without State cooperation and has, therefore, not entered the country. Considering this, States like Chile, Poland, Ecuador, Paraguay, Italy, Germany, Spain, Brazil, Georgia, and Lithuania recommended Venezuela to fully cooperate with the Mission by allowing it unhindered access to its territory. Some States also recommended that Venezuela cooperate with the International Criminal Court’s investigation on crimes against humanity.

The lack of independence of the Judiciary, the office of the Prosecutor and the Ombudsman

One transversal issue which affects all dimensions of the Venezuelan crisis is the lack of independence of the Judiciary, the prosecutors, and the Ombudsman. Different human rights mechanisms, including the Human Rights Committee in its concluding observations, the United Nations High Commissioner for Human Rights, the International Independent Fact-Finding Mission on Venezuela, the Inter-American Commission on Human Rights, and the Inter-American Court of Human Rights, have expressed concern over the lack of independence of judges and prosecutors. These public officials lack stability in their position since they have not been appointed as a result of a competitive and public examination as required by the Constitution.

In its last report of 2021, the Fact-Finding Mission on Venezuela documented the erosion of the justice system’s ability to protect human rights and prevent State-sponsored crimes perpetrated against sectors of Venezuela’s population. Amongst other conclusions, the Mission determined that “judges and prosecutors in the cases examined have denied, as opposed to guaranteed, some rights to real or perceived government opponents, in response to interference from political actors or from within the judicial or prosecutorial hierarchy” and that “prosecutors and judges at times played key roles in arbitrary detentions by sustaining arrest warrants, pre-trial detention orders and criminal charges based on facts and supporting evidence that did not involve criminal acts or individualize the defendant’s participation. In some cases, prosecutors and judges sustained detentions or charges on the basis of illegally-obtained, manipulated or fabricated evidence, including evidence obtained via torture or coercion”.

This was an issue of special concern during the UPR sessions, with a diverse group of more than twenty-five states recommending Venezuela to:

Violence against women and gender-based violence

The situation of violence against women and gender-based violence is one of the most concerning aspects of the Venezuelan crisis. Civil society organizations, like the Center for Justice and Peace (CEPAZ), have constantly denounced the discrimination and violence suffered by women in the country, including the high rates of femicides and the obstacles in the access to justice for these victims. In this regard, examining States recommended that Venezuela ensure respect for women and girls, particularly concerning sexual and reproductive health, and combat gender-based violence.

The UPR served as a relevant examination of the current human rights situation in Venezuela. On January 28th, the group in charge of drafting the final report, called the Troika, presented the Report of the Working Group with the summary of the interactive dialogue and the recommendations. The international community should continue to evaluate Venezuela’s compliance with the recommendations made by States.

The Human Rights Council will continue to discuss the Venezuelan human rights situation during 2022 in its sessions with updates and reports by the High Commissioner on Human Rights and the experts of the Fact-Finding Mission. The Council will also decide on the renewal of the FFM’s mandate during the last session of this year.