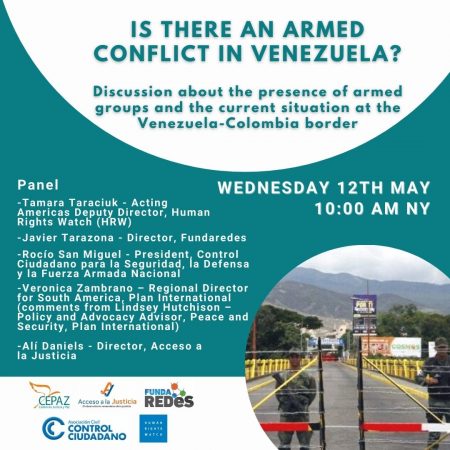 On the 12th of May 2021, the Center for Justice and Peace (CEPAZ) organised and event with panelists from Human Rights Watch, Fundaredes, Control Ciudadano, Plan International and Acceso a la Justicia, which sought to engage in a discussion regarding the existence of an armed conflict in Venezuela, its nature and the impact it has on the region and to think about the ways in which the international community can respond to prevent an escalation of the violence.

Fundaredes has reported that there are different armed groups operating in 21 of the 24 states across the country. Specifically in Arauca and Apure, Human Rights Watch has reported the operation of several armed groups including the National Liberation Army (ELN), a guerrilla group formed in Colombia in the 1960s; and the Martín Villa 10th Front and the Second Marquetalia, both of which emerged from the demobilized Revolutionary Armed Forces of Colombia (FARC) after the 2016 peace accord between the Colombian government and the FARC. The Patriotic Forces of National Liberation (FPLN), a Venezuelan armed group that originated during the 1990s, also operates in Apure.

Venezuelan security forces and other authorities have tolerated and, at times, colluded with armed groups operating in Apure. In recent years, the ELN and the FARC dissident groups appear to feel safer and able to operate more openly in Venezuela than they do in Colombia and they have camps in Apure. Some of these armed groups, which were originally created in Colombia have become binational guerrillas. They have increased their networks and roots in Venezuelan territory and have a high capacity to retaliate and attack the local population.

The armed groups use violence to control people’s everyday lives. They impose rules normally enacted and enforced by governments, including curfews; prohibitions on rape, regulation of fishing, debt payment and even closing times for bars. This is a way to exercise control over the territory.

For some of the organizations participating in the panel, the protracted armed confrontations between governmental forces and non-governmental armed groups and between such groups at the Venezuelan border, meet the criteria to qualify as a non-international armed conflict regarding the level of organization of the armed groups involved and the intensity of the hostilities.

The groups taking part in acts of violence display a sufficient level of organization,  they have a hierarchical structure and a chain of command capable of planning, coordinating and executing military operations and of recruiting and training weapon bearers, has internal disciplinary rules, and the group’s commanders are able to control both the members of the group and an area of territory.

The hostilities have also reached a certain minimum level of intensity, taking into account the duration and violence of clashes, the number of persons participating in hostilities, the manner in which they use force, the types of weapon used, the number of victims and the effects of the violence on the civilian population.

There was a second armed confrontation on the 31st of January 2021 the La Macanilla sector of the Pedro Camejo municipality, between the Venezuelan military and irregular armed groups. The armed confrontation was generated by disputes between members of the FARC dissidents, led by different leaders, who want to take over the area because it is conducive to the development of illicit activities, such as smuggling and drug trafficking.

On the 21st of march confrontations between the Venezuelan Armed Forces and the Martin Villa 10th Front broke out in various rural areas of Apure. These confrontations are ongoing. According to testimonies from the area where the attacks occurred, the Second Marquetalia is closely linked to the Venezuelan government and —to consolidate control over drug trafficking—they are seeking to remove the rival Martin Villa 10th Front. Residents also said that they had witnessed frictions between the ELN and FARC dissident groups over control of the area.

According to Control Ciudadano, the Venezuelan National Armed Forces are demonstrating the inability to control 70% of the Venezuelan territory that corresponds to the border ring, which allows the consolidation of these groups throughout the territory.

Fundaredes reported that on the 23 of April 2021 two helicopters of the National Armed Forces were taken by the irregular members of the FARC, and at least 28 military officials disappeared because they were ambushed by 300 guerrillas with heavy weapons in La Capilla. Their relatives do not know their whereabouts, it is said that they received wrong coordinates that left them vulnerable to be kidnapped by the guerrillas.

The organisations reported that Venezuelan armed forces have committed several human rights violations and crimes in the area. These include arbitrary executions, arbitrary arrests, the prosecution of civilians in military courts, torture of residents accused of collaborating with armed groups.

According to testimonies, security force agents raided the houses of families living in the town of La Victoria and its rural areas of El Ripial, Los Arenales, La Capilla y La Osa. The agents did not show a search warrant, witnesses said. Residents were dragged from their houses without arrest warrants.

On March 25, the FAES took four members of a family from their house in La Victoria and their bodies were found a mile away, in El Ripial, with cuts, bullet wounds, and apparent bone dislocations. Forensic experts concluded that photos of the bodies suggest that they had been moved, and that firearms and grenades may have been planted by their hands.

The attacks and clashes at the Venezuelan border are no isolated events, they respond to a more complex dynamic which extends to the rest of the national territory.

In 2020, the UN Independent International Fact-Finding Mission on Venezuela and the Office of the Prosecutor at the International Criminal Court found evidence that crimes against humanity may have been committed in Venezuela. The security forces identified as responsible for abuses included the same forces identified by the Fact-Finding Mission as perpetrators of grave human right violations and crimes against humanity. Among others, the FANB, the Special Action Force of the Bolivarian National Police (Fuerzas de Acciones Especiales, FAES), the Bolivarian National Guard (Guardia Nacional Bolivariana, GNB), and the National Anti-Extortion and Anti-Kidnapping Command (Comando Nacional Antiextorsión y Secuestro, CONAS).

These security forces have also been included as perpetrators of crimes against humanity committed in Venezuela since 2017 by the Office of the Prosecutor of the International Criminal Court in the preliminary examination of the situation Venezuela I.

For some of the organizations, like Acción a la Justicia, the attacks at the border have also included conducts regulated by article 8 of the Rome Statute and constitute war crimes, such as homicides and taking of hostages.

Venezuela informed the United Nations that it planted 1.700 antipersonnel mines around six naval bases near Colombia between 1975 and 1977, however, Control Ciudadano identified that a lot of these mined fields had moved because of floods in the river, so there is no certainty about their current location.

The organisation also warns that Venezuela may not be complying with the Ottawa Protocol in respect with over 70 mines which were installed in the Arauca river and belong to the national armed forces in the state of Apure. For the organization, this could show that the military forces in may be using or contemplating to use antipersonnel mines as a means of combat.

At least 5,800 people have fled Apure state for Colombia, according to the Office of the United Nations High Commissioner for Refugees (UNHCR). According to some of the organizations these number reaches 6.000. Shelters are overcrowded and aid is insufficient. 4 out of 10 displaced people are girls and boys. Plan International has stated that this displaced population has pressing needs such as Food, Health, WASH, and shelter. As 40% of the affected population are children, services such as protection and education are highly required.

As in other humanitarian contexts, girls are particularly vulnerable to sexual abuse and exploitation, and other forms of Gender Based Violence. Many girls and adolescents can resort to negative coping mechanisms that push them to early unions and pregnancy. It is also essential to continue with Mine Risk Education (MRE) activities.

How can the international community respond to prevent an escalation of the conflict?

The panelists of the event warned that the violence in the department of Arauca and Apure have a tendency to increase due to the dynamics of mixed migratory flows and the exacerbation of the armed conflict in the border zone. This means that the local population will continue to be impacted as the armed groups continue to engage in hostilities to control the area.

They also warned about the fact that the conflict will most probably extend to other areas of the territory where the armed groups are already present and carrying out operations, like Amazonas, Zulia and Bolivar.