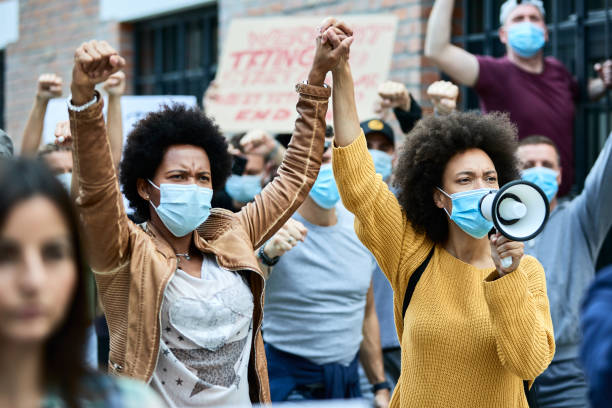 Last Tuesday, January 18th, an open ministerial debate was held by the United Nations Security Council on how violence against women threatens their full participation in peace and security processes. The discussion was facilitated by Norway, the country that holds the presidency of the Security Council during the month of January.

Peace without women is not sustainable

In her speech, the High Commissioner for Human Rights, Michelle Bachelet, pointed out that “the situation of women human rights defenders, and their participation in peace processes, is limited. However, this is necessary to fight against the causes of the conflict and its impact, including gender-based violence.”

“The application of Resolution 1325 on Women, peace and security, increases the protection of women defenders and peacebuilders. In reality, however, only 1 percent of funding in conflict situations reaches women’s organizations. There is also no enabling environment for women’s participation,” added the High Commissioner.

Bachelet said that her office has verified the murders of 35 human rights defenders, journalists and trade unionists in various conflicts. “We have also seen attacks on women who work on reproductive health and corruption issues, among others.”

Intimidation, violence and retaliation against women who cooperate with the UN is very high, Bachelet said. Even in countries that are within the program of the Security Council. “This is very negative for peace.”

The High Commissioner added that Resolution 1325 seeks strategies for the participation of women in public life. Protecting your rights is essential. The international community must continue to give women the opportunity to participate, creating a space for relations between the Security Council and women’s organizations. She added that obtaining disaggregated data on women’s participation in peace processes is essential.

For Bachelet “peace decisions that do not reflect the voices, realities and rights of women are not sustainable. There must be clear advocacy and significant investment in women human rights defenders and peacemakers.”

“The work of addressing discrimination, inequality, the denial of civic space for women and gender-based violence must also be a priority,” concluded Bachelet.

For her part, Zarqa Yaftali, executive director of the Women and Children Legal Research Foundation, explained that it is a critical time for women in Afghanistan. She indicated that a year ago she requested that the advances of women in that country be protected by the international community. “The world did not listen,” she asserted.

Yaftali addressed the Security Council on this occasion as a refugee. As she pointed out, all the gains made by women in Afghanistan were lost. “I have lost my country overnight.” Women and girls demonstrate in Kabul and elsewhere for their right to work and education to be restored. They are threatened by the Taliban for doing so. Some have been arrested or disappeared. “We don’t know if they are alive or dead.”

“Afghanistan is an example of what can happen when the international community does not keep its promises,” she warned. It is time for the Security Council to break the silence on the future of the 30 million Afghans, approximately 15 million of whom are women. Clearly stating their expectations for the protection of women’s rights by the Taliban, including unrestricted access to education, work and participation, and the right to defend rights without reprisals.

It is necessary that a negotiated peace process be requested in Afghanistan with the full participation of women in all its phases. “Please break your silence,” Yaftali requested the Security Council.

Kavaya Asoka, representative of the NGO group on Women, Peace and Security, a coalition of 18 organizations that has been advocating for women’s rights and participation in peace and security for 20 years, said that the increase in reprisals against people going to the Security Council to give information is alarming. “Public space is closed, human rights are worn and there is an increasingly misogynistic environment.”

“About a third of the women we have supported to report to the Security Council have been intimidated or have suffered retaliation. 67% of the cases were committed by state actors. That’s just the tip of the iceberg.” Many cases have gone unreported for fear of retaliation or mistrust that they will be investigated, Asoka said.

“Women defenders need funding for urgent needs such as personal security, relocation, making their homes and offices safer, paying legal fees, among others. While protective measures can keep them safe temporarily, only genuine political support for their work can ensure their long-term safety,” she added.

“Silence is complicity. They cannot afford not to do anything, if they want to meet their obligations under the women’s peace and security agenda.” Asoka urged the member states of the Security Council to stop intimidation, attacks and reprisals, end impunity and ensure accountability for all those who commit these acts and provide the political support “that can keep a human rights defender.

“We need a safe environment for defenders, decriminalize their work and pass laws that protect their rights. We urge you to challenge those who believe it is not a woman’s place to question authority, speak out against abuse, challenge power and patriarchy. Answering that a woman’s place is exactly where she decides she should be, whether it’s fighting for human rights, participating in a peace process, protesting in the streets, or sitting in this room with you,” Asoka concluded.

In the round of participation of the member states, the Security Council was asked to urge the Secretary General to guarantee the allocation of specific resources to respond to threats against women peacemakers. Sanctions committees should be used to bring justice to the perpetrators of such acts. The United Nations must defend women whistle-blowers and condemn all attacks against them.

A zero-tolerance approach to reprisals was also requested, as well as special attention to women who report to the Security Council, putting their own lives and that of their families at risk. Another recommendation was the creation of a protocol for the protection and monitoring of individual cases.

Ensuring an adequate response For her part, the Norwegian Minister of Foreign Affairs and President of the Council in January, Anniken Huitfeldt, stressed that the participation of women must become “the new normal”. She stressed that women peacemakers and human rights defenders must be able to count on the resources they need. “If the worst happens, we must ensure an adequate response,” he said. Huitfeldt urged work to achieve the goal of guaranteeing the full, equal and meaningful participation of women in all stages of peace processes