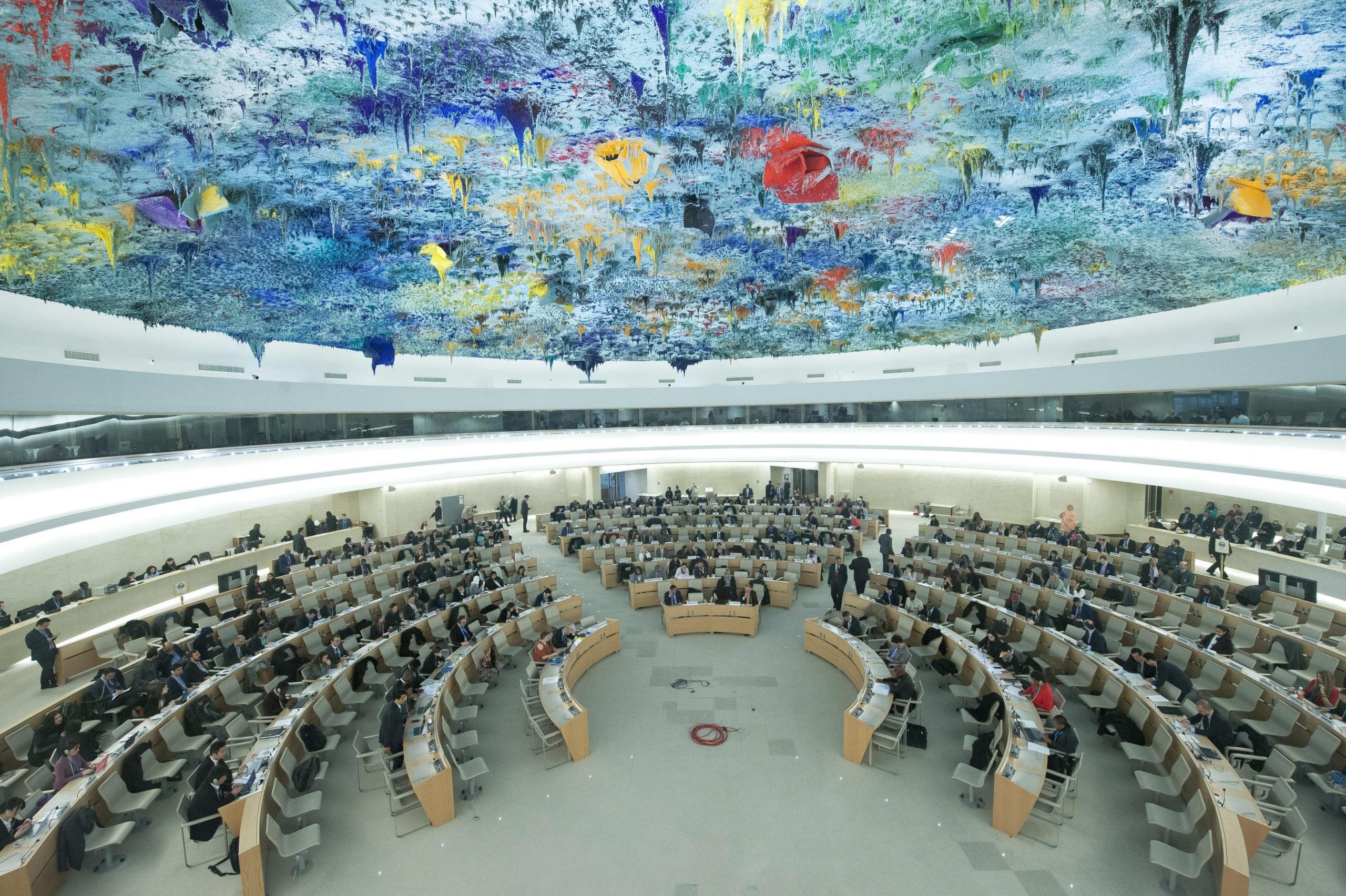 After getting elected with one of the lowest majorities in the 2019 elections, the Bolivarian Republic of Venezuela is running for a second term in the Human Rights Council (HRC).  Elections will take place on October 11 at the General Assembly of the UN. States will choose two new members of the Council from the Latin American region. The candidates for these two seats are Costa Rica, Chile, and Venezuela.

According to UN Resolution 60/251, “when electing members of the Council, Member States shall take into account the contribution of candidates to the promotion and protection of human rights and their voluntary pledges and commitments made thereto”. There are sufficient reasons to believe that Venezuela is not currently complying with its obligations on the promotion and protection of human rights. In the process of elections at the General Assembly, States should evaluate the current human rights situations in Venezuela and the role that the country has played during its current period as a member of this human rights body.

Venezuela does not comply with Human Rights Council membership requirements

Members elected to the Council shall uphold the highest standards in the promotion and protection of human rights; fully cooperate with the Council and be reviewed under the universal periodic review (UPR) mechanism during their term. Member States are encouraged to share information on their voluntary pledges and commitments both with the public in their respective countries and with all other Member States.

The International Service for Human Rights (ISHR) has drawn up a scorecard for each candidate at the Human Rights Council to show if and how they comply with the 8 standards in the promotion and protection of human rights. Venezuela does not comply with any of them. Indeed, Venezuela not only did not submit any public pledge on its candidacy, but it also didn’t even show up at the pledging event for candidate States on 7 September 2022 in preparation for the elections to the Human Rights Council.

This article takes into account several standards to show that Venezuela does not currently comply with the requirements needed to be elected to the Human Rights Council. During the voting at the General Assembly, Member States should highlight these issues.

Venezuela has used their seat at the HRC to hinder human rights mechanisms. During its last mandate, from 2020 to 2022, Venezuela voted against most of the Council Resolutions, including the extension of the mandates on Yemen, Private Military and Security Companies, Hazardous Substances and Wastes, Burundi, Venezuela, People of African Descent, and Somalia and the resolutions on the human rights situations in Yemen, Burundi and Syria.  Additionally, they have never introduced any resolution to the Council or expressed comments about those adopted without voting.

Payment of UN contributions in time

Another requirement for being that should be considered when electing a member of the HRC is whether the State has paid the UN contributions in time. Venezuela is among those States that at the present day are in arrears under the terms of Article 19 of the Charter of the UN. According to the Charter, “A Member of the UN which is in arrears in the payment of its financial contributions to the Organization shall have no vote in the General Assembly if the amount of its arrears equals or exceeds the amount of the contributions due from it for the preceding two full years. The General Assembly may, nevertheless, permit such a member to vote if it is satisfied that the failure to pay is due to conditions beyond the control of the Member”. The minimum payments necessary to reduce the amount owed Venezuela on its contributions so that it remains below the gross amount assessed for the preceding two full years (2020 and 2021) is 398.507.661 U.S dollar.

The situation of human rights in Venezuela has been under the attention of the international community during the last years.

During the last years, the UN country team, the Office of the High Commissioner of Human Rights (OHCHR), the Independent International Fact-Finding Mission (FFM) and special procedure mandate holders reported cases of disproportionate use of force to repress protests, restrictions to the right to liberty of demonstrators as well as cases of unlawful arrests, arbitrary detentions, and violations of due process guarantees against individuals on the grounds of their alleged involvement in actions to destabilize the Government.

Both the Office of the High Commissioner on Human Rights (OHCHR) and the Fact-Finding Mission on Venezuela (FFM) have documented the existence of systematic human rights violations, including allegations of torture and other cruel, inhuman, or degrading treatment or punishment, and documented cases of migrants who were victims of trafficking in persons, in particular women, girls, and boys, for the purposes of sexual exploitation, labour, and recruitment for illicit activities by criminal organizations and armed groups. The FFM has concluded that some of them may account for crimes against humanity as they were not isolated acts, but part of a plan created by high ranking officials.

Regarding Economic, political, and social rights, the OHCHR was concerned about the low levels of income, savings, and pensions of public officials, and indicated that the access to sexual and reproductive health had worsened in 2020 with reports of an increase in maternal mortality and a severe shortage of medicines and treatments.

Moreover, both the OHCHR and the FFM remained concerned about the lack of independence of the justice system as undermined by the insecurity of tenure of judges and prosecutors, the lack of transparency in the process of designation, precarious working conditions, and political interference, including links between members of the Supreme Court and the Government and the ruling party.

Venezuela is also the first Latin American country to have a formal investigation by the Prosecutor of the International Criminal Court (ICC). In 2018, Fatou Bensouda, following a careful, independent, and impartial review of several communications and reports, decided to open preliminary examinations into the situation to examine the crimes allegedly committed in this State Party since at least April 2017, called Venezuela I.

In 2019 the OTP concluded that there were reasonable bases to believe that state authorities have committed the crimes against humanity of persecution, deprivation of liberty, torture and other inhumane treatments and sexual and gender-based violence. On 5 November 2021, the Prosecutor, Mr. Karim A.A. Khan, opened a formal investigation pursuant to Article 54(1)(a) of the Rome Statute.

The Inter-American Commission on Human Rights has also been actively involved in the monitoring of the human rights situation in Venezuela. In 2019, the IACHR announced the establishment of the Special Follow-up Mechanism for Venezuela (MESEVE) in order to respond in a timely and effective manner to the new challenges required by the serious human rights crisis in the country. Since 2005, the Commission included Venezuela amongst the countries with the most worrying human rights situation in the region, in chapter IV of its annual report. As the crisis worsened in 2016, the IACHR intensified its monitoring efforts in the country.

This year, four cases have been submitted to the Interamerican Court of Human Rights against Venezuela, including the case of Henrique Capriles, regarding the violation of various conventional rights to his detriment during the presidential elections of 2013; the case of Milton Gerardo Revilla, which concerns violations of several rights during Revilla’s detention and military criminal proceedings against him; the case for the violation of the political rights of Mayor Omar Adolfo Lares Sánchez, and the illegal detention and torture of his son, Juan Pedro Lares Rángel; and the case of Alfredo José Chirinos Salamanca et al, which concerns the international responsibility of the State for human rights violations against 14 police officers of the Chacao Municipal Police in the context of the deprivation of their liberty.

While being a member of the HRC, Venezuela has also attacked civil society and human rights defenders and increasingly restricted civic space in the country.  According to the report of the Secretary General about “the Cooperation with the United Nations, its representatives and mechanisms in the field of human rights”, Multiple United Nations actors addressed allegations of intimidation and reprisal against human rights defenders and civil society actors who cooperated or were perceived as cooperating with the UN, those implementing UN humanitarian programs.

They noted that non-governmental organizations were labelled as criminals, mercenaries, thieves, terrorists and enemies of the State, including in UN forums and on Government-affiliated online portals. The FFM called for protection guarantees to ensure that there were no reprisals against those who had provided information to the fact-finding mission and their family members.

Conclusions of the Universal Periodic Review (UPR): States expressed their concerns regarding the situation in the country and Venezuela received 328 recommendations during their last cycle

One mechanism within the UN system is the Universal Periodic Review and the compliance with it is one of the 8 standards of ISHR scorecard. The UPR assists countries in fulfilling their international obligations and commitments to people, including the achievement of the Sustainable Development Goals (SDGs). According to the HRC, Venezuela failed to develop and publish an action plan for the implementation of UPR recommendations and a UPR mid-term report.

Venezuela has completed three cycles of the UPR.  The first and second UPR reviews took place in October 2011 and November 2016, respectively. Between these two reviews, it is possible to notice the deterioration of the status of human rights in the country. Indeed, in the second UPR review the Working Group recommended the country be downgraded to B status in accordance with the Paris Principles, a set of international standards which frame and guide the work of National Human Rights Institutions (NHRIs). Having a NHRI in conformity with the Paris Principles (A-status) is another of the 8 standards of the scorecard for the candidacy as a member of HRC.

Venezuela’s human rights record has been examined by the UN Human Rights Council’s Universal Periodic Review (UPR) for the third time on 25 January 2022. During this last UPR, there was an increase in the number of recommendations, from 149 in the first circle to 278 in the second to 328 in the last one. Many of these recommendations are about civil society, structural issues such as the humanitarian crisis, armed groups and democracy, civil and political rights, economic, social and cultural rights, specific populations with great importance in the subject of women. Therefore, there is a strong consensus to maintain the office of the UN Resident Coordinator and to extend the mandate.

Call to Actions: UN Member States mush highlight that Venezuela does not comply with its human rights obligations

The elections for members of the Human Rights Council must serve as an opportunity for UN Member States to highlight that Venezuela does not comply with its human rights obligations. In fact, the lack of investigations and access to justice for grave human rights violations have caused the international community to activate different international mechanisms regarding the country. States should consider whether the candidates meet international standards for the promotion and protection of human rights. During their last period at the HRC, Venezuela has used their seat to ensure regression on the protection and promotion on human rights, not only in Venezuela but in the grave human rights situations around the world.

This author does not have any more posts.